The Sub Station No. 164 has been revitalised as part of a fantastic redesign that combines two historic Sydney structures to create one of Australia’s premier office complexes. This one-of-a-kind, seven level structure in Sydney’s CBD is located at 183–185 Clarence Street in the heart of the city, completing a $180 million renovation to restore and utilise the two buildings as Built’s new Australian headquarters, with an emphasis on sustainability and a 6 Star Green Start Star and WELL rating that prioritises the health and wellbeing of its employees.

Versalux, Built, CESA, FJMT, and JHA Engineers collaborated closely on the project; Versalux was briefed with creating lighting solutions that would stimulate the workplace while also producing natural light, allowing employees to transition from increased alertness to calming effects of light. Versalux’s lighting solution for Sub Station No. 164 is the revolutionary MelaGen® system, which provides lighting benefits based on Alertness CRC’s scientific and innovative research in partnership with Monash University. Through this proprietary LED chip design, Versalux provided a ground-breaking range of luminaires with its new generation of MelaGen® enabled products to combine lighting, science, and innovative research into one of the most exclusive boutique office buildings in Sydney.

The MelaGen® luminaires are designed in three configurations, tailored to the environment – MelaGen® Blue, MelaGen® ReFresh, and MelaGen® ReGen. Like most daylight hours, MelaGen® Blue LEDs have excellent colour rendition properties including enhanced output in blue wavelengths that suppress the release of melatonin. MelaGen® ReFresh LEDs also delivers excellent colour rendition, but with a blue depleted spectrum that, like early and late hour daylight, does not suppress melatonin release, thus avoiding the alerting effect that blue lighting components create. MelaGen® ReGen luminaires combine both MelaGen® Blue and MelaGen® ReFresh LEDs in the one luminaire with specialised drivers that allow transition between the two LED types.

Studio Station No. 164 has selected MelaGen® ReGen technology to be used in the open plan, meeting rooms and corridors utilising the MelaGen® Blue through the working spaces and allowing the Melagen ® ReFresh component to be used for more social activities. The INFINITI MelaGen® is a meticulously-engineered high-performance linear LED fixture, which has been suspended throughout the industrial office environment to create an audacious aesthetic. The INFINITI series is one of the many new MelaGen® enabled products launched by Versalux as the range continues to grow in versatility and stature.

The INFINITI MelaGen® is a distinctive feature for the open plan that highlights the environment, utilising cutting-edge technology in LED design to produce high levels of blue light along with superb colour rendition to create alertness and positive effects on employee wellbeing, in concert with the large windows that delivery high levels of natural daylight, and complemented by its slick black colours to match the modern workstations.

The INFINITI MelaGen® luminaires were chosen for the meetings rooms of Sub Station No. 164, suspended from the ceilings, with a minimalist design achieving an architectural effect that enhances the functional and industrial aesthetic. The INFINITI MelaGen® luminaires produce excellent horizontal and vertical illumination for a great solution powered by MelaGen® LEDs to keep meetings and interactions flowing smoothly.

In the corridors the INFINITI MelaGen® blends with the industrial aesthetics as it is wire suspended from the ceilings in the corridors, establishing the desired tone against exposed brick and black walls. The INFINITI MelaGen® serves as a visual aid for moving between spaces in the multi-purpose office building. The powerful MelaGen® LED chips illuminate the features of the area with ease, creating a dynamic and uplifting environment for the staff and visitors of Sub Station No. 164. 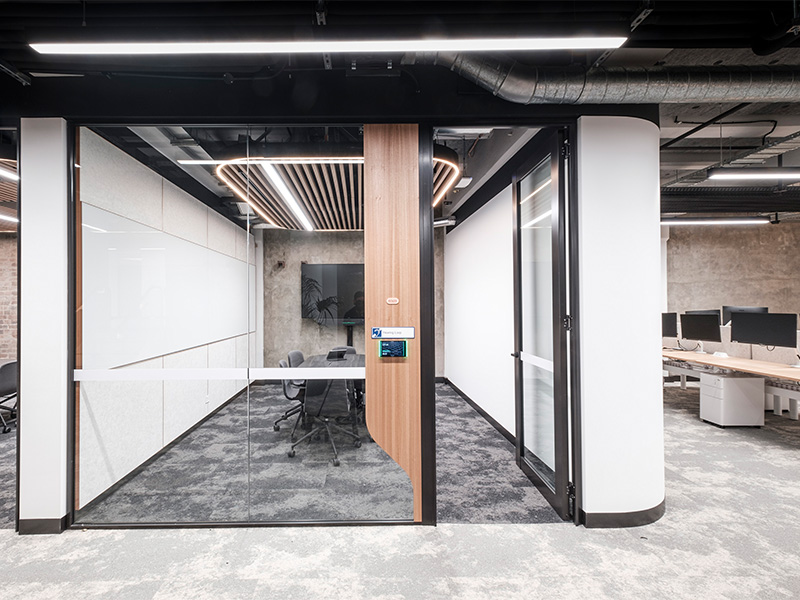 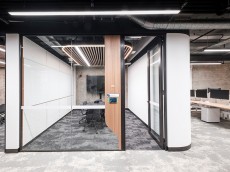 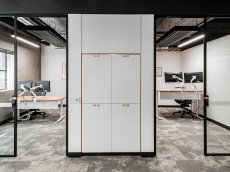 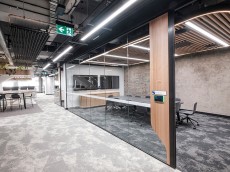 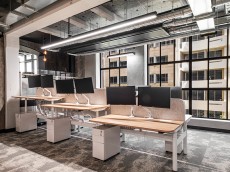 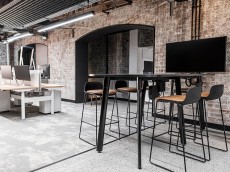